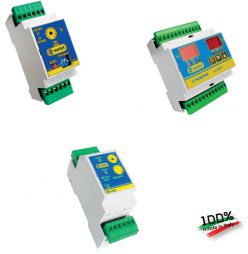 Once set the logic of the machine the need to make any changes related to a detection sensor may occur, Selet comes to the rescue with its interface for sensors.

The simple installation and the small size are an advantageous compromise, perfect in order to avoid additional cost, which might be sometimes exorbitant.

Selet's interfaces are comfortably placed thanks to Omega hooks on the din-bars inside the case.

According to the model, it is possible to: convert a signal coming from a sensor; set a delay during the damping and un-damping cycles of the sensor, and, finally, manage two sensors separately.

• SS009900: series with double relay with changeover contacts NO + NC. Input for PNP/NPN/NAMUR, MICRO-MECHANICS sensors, and no-amplified photoelectric barriers. Settable timing at the damping and un-damping cycles for each input (max 99 hours) and monostable cycles (one-shot). Two displays to show the counting and the process steps. Setup via keyboard for one input and two outputs with different and separate timings.